Long Island breweries make a great day trip and brewpubs are the perfect way to relax while enjoying good beer and good food.

Although Long Island is widely known for its wine, some pretty darn good beer is made here too. It doesn’t get the same publicity as Long Island wine, but our breweries craft a wide array of award winning beers that are indeed worthy of attention.

If you’re a beer lover the Long Island breweries and brewpubs offer something you just can't miss--great beer, great food, and a great time. 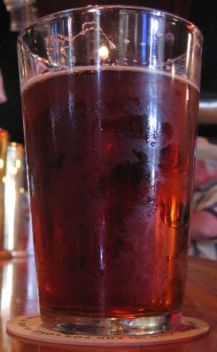 There's really only one brewery on Long Island and that is the Bluepoint brewery in Patchouge.

Two if you count The Brooklyn Brewery, which technically is in New York City, but from a geographical standpoint, solidly on the island.

Left: A pint of BrickHouse Red at the BrickHouse Brewery in Patchogue.

I include it here because many visitors come to Long Island via New York City and would pass the Brooklyn Brewery right by if they didn’t know about it.

It’d be a shame to miss the outstanding beers made by world renowned brewmaster and America’s foremost authority on beer, Garrett Oliver.

If you plan on visiting breweries on Long Island, The Brooklyn Brewery should be on your itinerary as well as the Blue Point Brewery.

In all there are four brewpubs on Long Island. Each of them serves extraordinarily well made beer in many styles along with food that's on par with anything you’d get in a non-brewing restaurant.

The four Long Island brewpubs are:

See the directory for reviews, locations and phone numbers.

The breweries make an excellent Long Island day trip and the brewpubs are great for lunch, dinner or anytime you want to enjoy good beer and good food with family and friends.

By the way, when visiting a brewpub don't be shy about asking for samples. They'll give you small glasses of whatever's on tap so you can try everything before committing to a whole pint.

What’s the difference between a brewery and a brewpub? Glad you asked…

Brewpubs are pubs/restaurants that in addition to serving food, make and serve their own beer.

Breweries on the other hand make, keg and bottle beer for distribution to a wide target audience. Brooklyn Brewery and Blue Point Brewery are true breweries in that sense of the word and are the only breweries on Long Island.

Some brewpubs, such as Southampton Publick House, do distribute their beer (half of Publick House's beer is sold off-site), but most just keg their beer and serve it on the premises.

There are a number of Long Island Beer Festivals that take place annually.

There is one other fermented alcoholic beverage made on Long Island that is neither wine nor beer: Mead.

Mead is made like wine, but honey is fermented instead of grapes. Meads range from very dry to very sweet just like wine and mead is sometimes even referred to as honey wine. But that’s where the similarities end.

Mead is a beverage all its own and the only place on Long Island to taste it and see how it’s made is at the award winning Long Island Meadery in Holbrook.

Want to make your own beer/wine/mead? There are several beer & wine making supply houses on Long Island where you can get everything you need:

See the Long Island Beer Guide for news, events, and where to enjoy great beer on Long Island.