Getting Around on Long Island

Long Island is a mix of suburban and rural communities joined together by a network of asphalt and concrete.

Those paved roads along with a handful of gravel roads, dirt roads, back roads and bad roads are the foundation of our transportation system.

So, if you want to get around on Long Island you’ll need a car.

If you’re driving here or taking one of the Long Island ferries, no problem, you already have your car with you.

If you’re flying in and can’t bring your car on the plane, you can rent a car at the airport. 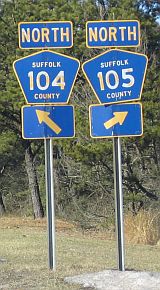 The only exceptions to the car requirement are:

Going to The Hamptons from Manhattan – you can use the Hamptons Jitney. You’ll need a way of getting around once you get there though.

Left: Decisions, decisions. Heading north on 31 from Sunrise Highway you are confronted with this. Take 104 for Riverhead, 105 for wine country.

Going to Fire Island from Manhattan – Use the train & cab to the ferry terminal.

The Lay of the Land

Geographically speaking Long Island is true to its name and is actually about 5 times longer than its width. There are several roads running Long Island’s 110-mile length that make traveling in the east - west direction relatively easy.

On the other hand, if you want to cross the island (north – south) things can get interesting. Because the roads that cross Long Island in that direction are spread out over a 100 mile length they’re not quite as accessible.

Generally, driving on Long Island involves traveling either east or west to the desired north-south route, then east-west again until you reach your final destination. It’s very simple, but crossing the island can take a little time.

A Note About Geography

There are four counties on Long Island. From west to east they are: Kings (Brooklyn), Queens, Nassau, and Suffolk.

When most people think of Long Island they are thinking only of Nassau and Suffolk counties. Politically, that is correct because Brooklyn (no one ever refers to it as Kings) and Queens are part of New York City.

For our purposes here, Long Island refers only to Nassau and Suffolk.

You’ll notice that there are Parkways and Expressways on Long Island.

Long Island’s parkways are limited access roads that are scenic as well as efficient in moving traffic. Only vehicles with passenger plates are permitted on the parkways. If you have commercial or truck plates (tags) on your vehicle you must stay off the parkways.

Long Island’s expressways (there are only two) are limited access roads that are very industrial looking and permit commercial as well as passenger traffic. Driving on the expressways means sharing the road with all manor of large commercial vehicles.

Driving on the parkways is far more scenic and you won’t have to worry about that big truck rumbling along next to you.

Ocean Parkway
Ocean Parkway runs east and west on Fire Island between the southern end of Meadowbrook State Parkway and Captree State Park. Many people (myself included) use this very scenic road to avoid rush hour traffic on the Southern State Parkway.

Montauk Highway (NY Route 27A)
Montauk Highway is the southernmost main road on Long Island. It runs from Freeport to Montauk and is the slow, scenic way to get from one place to another. Use Montauk Highway when you have only one or two towns to drive through, or you have a lot of time on your hands and want to take in the sights.

NY Route 25
Running north of the expressway Rt. 25 takes you from Queens Village all the way to Orient Point. In Nassau County it’s called Jericho Turnpike. Somewhere around Smithtown it becomes Main Street then Middle Country Road. In Riverhead it becomes Main Street again then Main Road all the way out to Orient. 25 is pretty much slow going through Nassau and Suffolk counties. Use it when you don’t have far to go or have no other choice.

NY Route 25A
25A is the north shore equivalent of Montauk Highway. Slow going, but takes you through the heart of every town. Like 25 it has its share of name changes as well and there are too many to list here.

Cross Island Parkway
Cross Island Parkway is the westernmost parkway on Long Island. Bordering Queens and Nassau, the Cross Island will get you to the Throgs Neck and Whitestones Bridges on its northern end and Sunrise Highway, the Belt Parkway and JFK Airport on its southern end.

Seaford–Oysterbay Expressway (NY Route 135)
Pronounce the first part of the one as one word, Seafordoysterbay. Rather than say that mouthful Long Islander’s usually refer to this one as the S.O.B. The Seaford-Oysterbay will get you from Montuak Highway in Seaford to Jericho Turnpike (25) in Woodbury.

Nichols Road (CR 97)
Nichols Road runs from Sunrise Highway in Bluepoint all the way to 25A in Stony Brook and Setauket. This road moves quickly and is a great way to cross the Island.