Baymen are judged not by their age, but by what they can produce.

Boating with the Baymen is an annual tour given by Long Island Traditions, a historical organization committed to “preserving the living cultural traditions of Long Island’s ethnic, occupational, and architectural heritage.”

The tour is a way for the general public to meet baymen and other people who, in some way, earn their living by the waters of the Great South Bay. 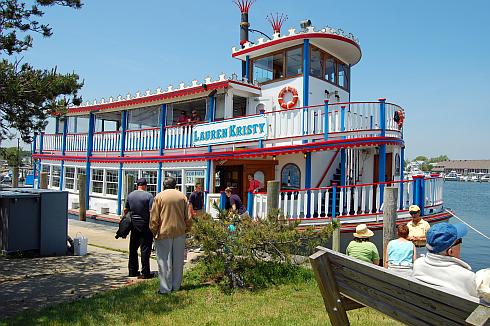 Boarding the Lauren Kristy for Boating with the Baymen

For three hours we sailed in perfect weather aboard the tour boat Lauren Kristy while listening to stories told by a bayman and her son, a year-round Fire Island resident, and a representative of the Fire Island National Sea Shore. Nancy Solomon, executive director of Long Island Traditions, acted as moderator and tour guide.

As the boat passed Fire Island no one aboard could resist straining their neck to get a better view of one of the most beautiful places on earth. It’s easy to envy the baymen, working in such a beautiful setting, but for all the beauty there’s struggle. 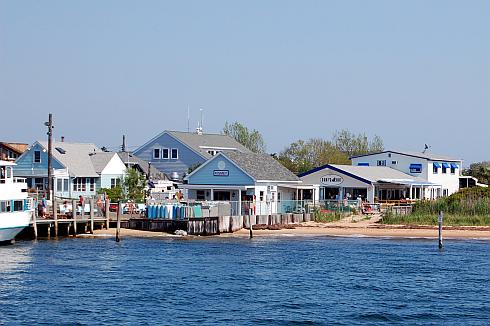 A bayman is someone who works the bay all year round fishing or trapping whatever is in season at the time. The catch could include crabs, eels, shiners, conch, killies, scallops, oysters, mussels, clams, bunker, bluefish, etc. depending on the time of year and the market demand.

The life of a bayman is not easy. If dealing with the weather weren’t enough, government regulations, market conditions, fuel costs, and declining fish stocks make the baymen’s life all the more difficult. At the same time resentment from people wanting fish on their plates, yet protesting the sight of a fishing boat out their waterfront window, just adds insult to injury.

If it were me I’d find a more reliable way to earn a living, but listening to Flo Sharkey and her son Paul talk about how they got started in this business and why they continue to work it sheds some light on these fascinating people.

Flo, Long Island’s only woman bayman and president of the Brookhaven Baymen’s Association, started clamming with her father when she was a little girl. The work was fun and the money was good. Although she completed 2 years of college she ultimately decided that working the bay was better than finishing college and working a desk job—for far less money.

Her son Paul shares a similar story as do many of Long Island’s baymen. They start young and fall in love with the work. The pay was good and so it became easy to settle into the lifestyle and difficult to imagine that it would not last forever. 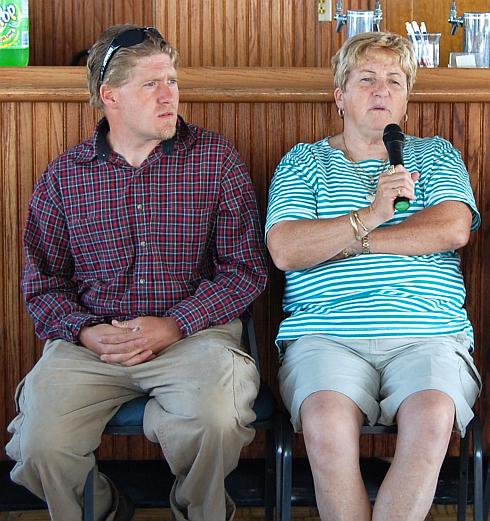 Paul Sharkey and his mother, Flo describe their lives as baymen

Today it’s harder than ever to earn a living on the bay and the future is not very promising. You could clearly hear the frustration in Paul’s voice as he described the difficulty in coping with ever increasing regulation, most recently the ban on horseshoe crab fishing on Fire Island.

Yet it’s easy to understand why the baymen never give up. The bay offers the kind of freedom and beauty that is just not available in most forms of employment. Slaves to the work yes, but masters of their domain they will always be.

After Flo and Paul finished we went out on deck to take in the sites and fresh air of the Great South Bay. To the north was the mainland; and south of us the bay’s vast expanse. Off in the distance, Fire Island. 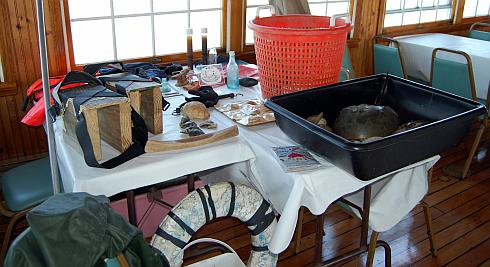 Some baymen’s tools and artifacts from the bay

As we approached Fire Island Pete Clock, one of only 500 permanent residents, spoke next. Pete is a building contractor and also runs a small charter boat business on the island. As a full time resident he enjoys the beauty of Fire Island all year round and faces some interesting challenges of island life that most of us never have to deal with.

Groceries for example; you can by them on the island if you want to pay the price, but it is much more economical to buy them on the mainland and haul them home on your own boat. Need building supplies for a home improvement project? You’ll be shipping them home on one of the Fire Island Ferries freight boats, which Pete says are loaded and unloaded with amazing skill and efficiency. 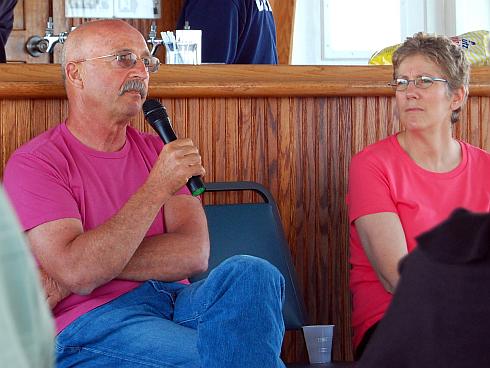 Electricity, provided by the Long Island Power Authority (LIPA), comes to Fire Island by cables running under the bay. The costs associated with maintaining those cables are clearly reflected in resident’s electric bills. Not surprisingly, almost everything else is more expensive on the island too. The big surprise however, is what’s not: property taxes.

School taxes make up roughly 50% of most Long Islander’s property tax bills. On Fire Island there is a relatively large tax base compared to the size of the school district, so school taxes are a just a few percent of the total tax bill.

Although there are some minor inconveniences associated with living on an island I think the beauty and lifestyle are well worth the effort. I, for one, would love to live there someday. 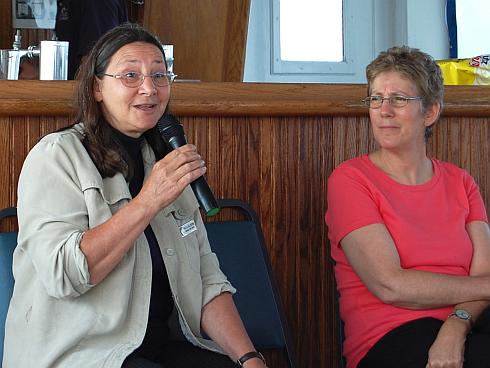 As the Lauren Kristy slipped past the Fire Island lighthouse and we began our return home Paula Valentine from the Fire Island National Sea Shore spoke to us about the role of the Sea Shore and how it affects the baymen and the communities on Fire Island.

The National Park Service (NPS) was invited to Fire Island in the early 60’s during an effort to stop Robert Moses from building a highway down the center of the island. The park service, which had already been considering Fire Island for national park status, created Fire Island National Seashore (FINS, or just “the Sea Shore”) in 1964.

If it weren’t for the involvement of the NPS Fire Island would not be the stunningly beautiful place it is today. As a national park development on the island is strictly controlled as is motor vehicle access, and a multitude of other things.

This tight control sometimes creates tension between Fire Island residents and the NPS, but as Pete Clock mentioned during his presentation, the NPS works for the ultimate good of the island, and most residents understand and appreciate the positive effect it has had on their lives on the island.

The baymen are sometimes at odds with the Sea Shore as well. Most recently over a ban on horseshoe crab fishing. The ban, a result of a technicality, prevents fishermen from taking horseshoe crabs on the shores of Fire Island as they have done for generations.

Crabs, like shrimp and lobsters, are crustaceans which most of us know simply as shellfish. In spite of their name, horseshoe crabs are actually not crabs at all, but are in a class of their own called Merostomata (legs attached to mouth). Based on this fact a federal court ruled that horseshoe crabs are not shellfish, but “wildlife” and so are subject to regulation under the NPS. 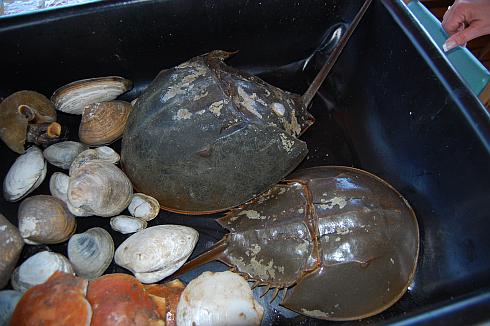 A collection of shellfish harvested from the Great South Bay

According to Fire Island National Seashore superintendent Chris Soller horseshoe crabs are not threatened or endangered, and there is little data to suggest that dependent species are affected, so I can understand why baymen like Paul Sharkey are frustrated. Regulations that seemingly don’t make sense are a commonly heard compliant among baymen.

The Great South Bay, Fire Island and its communities, and the baymen are important parts of Long Island’s economy, heritage, and culture. They exist in a delicate balance that is difficult, but hopefully not impossible to maintain.

I am grateful for organizations like Long Island Traditions and people like Nancy Solomon, Flo & Paul Sharkey, Pete Clock, and Paula Valentine for their dedicated efforts in preserving the places that Long Islander’s cherish, and the traditions that give them soul.

The issues facing shore residents and government planning agencies are many and complex. The South Shore Estuary Reserve Council was created to address the things affecting the reserve and the many Long Islanders living within its bounds.

Crawling the coast for the past 300 million years (that’s 100 million years before the dinosaurs arrived) horseshoe crabs are one of my favorite sea creatures. Learn all about these amazing animals at Horseshoecrab.org.