If you like fishing, Long Island history, nostalgia, or are one of those people who can’t get enough of sand, sea and surf, then Men’s Lives is a book you might enjoy.

It is filled with long, quoted passages from interviews with old time baymen along with Mr. Matthiessen’s insightful commentary.

The hard cover edition is wonderfully illustrated with old photographs, maps, and drawings of fish and the tools of the trade.

Peter Matthiessen is an extraordinary writer and was a Long Island fisherman himself. He tells this story like only a fisherman can, reporting, reminiscing and documenting the lost art, science and history of earning a living from what you can haul out of the sea.

Many people have called Men’s Lives an elegy and I believe that description is accurate. The Long Island fisheries have been waning one way or another since the oyster beds were wiped out in the early 1900’s and as the fisheries go, so do the baymen.

Most of the surfmen come from the main fishing clans, which descended from the farmer-fishermen and the offshore whalers of centuries ago.

In recent decades, most fishing families have been forced to sell off land that had been in the family for generations. Those who are left subsist in the last poor corners of a community in which they were once the leading citizens.

Meanwhile their townsmen, prospering on the bland resort economy, have mainly lost a historical sense of the ocean character of the South Fork that attracted so many wealthy visitors in the first place.

Few of the few who are even aware that a fishing community still exists enjoy the community with the past represented by boat-filled backyards in the oak woods of Amagansett and the Springs, by sharpies and scallop dredges, flag buoys and fish traps, by a dory in black silhouette on the huge empty sky off the ocean beach.

But Men’s Lives is not some teary-eyed tale designed to make us feel sorry for these guys.

More than just a elegy it is a deep, detailed and accurate history of the surfmen and baymen of Long Island’s south fork (i.e. The Hamptons).

Matthiessen starts in the 1600’s and brings us through the years right into the present. Chapter titles like:

are appetizers for the meat within and a thoughtful epilog wraps it all up.

The book is profusely footnoted and the notes themselves make interesting reading.

Men’s Lives was first published on 1986 and is now somewhat hard to get. You can usually find copies in your local public library or used on the Internet.

Both hard cover and soft cover editions (below) are usually available and I strongly recommend the hardcover edition for the larger print, photographs and illustrations. 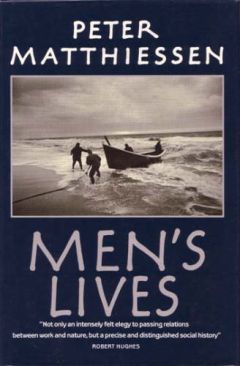 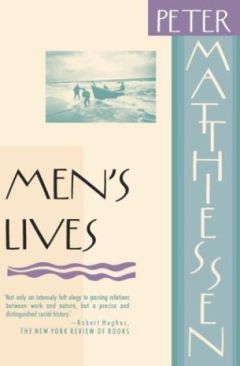 Men’s Lives:
The Surfmen and Baymen of the South Fork
By Peter Matthiessen
Vintage Books
1986