Channing Daughters winery in Bridgehampton, on the South Fork, has a friendly, familial feel from the moment you walk into it...

“Wow... that guy's going really fast,” Ron Phillips says, the wine bottle he's pouring from held in mid-air as he watches the road behind me. I turn to see a car coming down the road at what is, admittedly, quite a pace. “Sorry,” he says, turning back to me after a few moments of watching the car careen around the bend and pull up to the tasting room. “Dust isn't good for the vines.”

No need to apologize, I think, but instead I just smile and allow him to pour me the next taste, launching into his next explanation. That's one of the reasons I like it here. 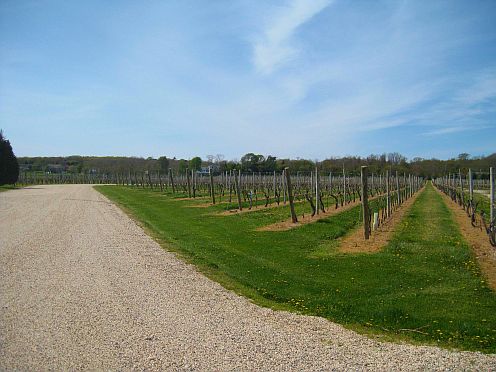 Channing Daughters Winery in Bridgehampton, on the South Fork, has a friendly, familial feel from the moment you walk into it: a small tasting counter with three people working is all you see: no hyped-up cheese counter or giant tours like some other wineries. It brings tasting back to its essence, a place to come see what the vineyard has to offer and what you'd like to pack into your car to drink at home. It makes me want to like Channing Daughters immediately, but it takes speaking with Ron and tasting some of the varietals he's pouring to make up my mind. 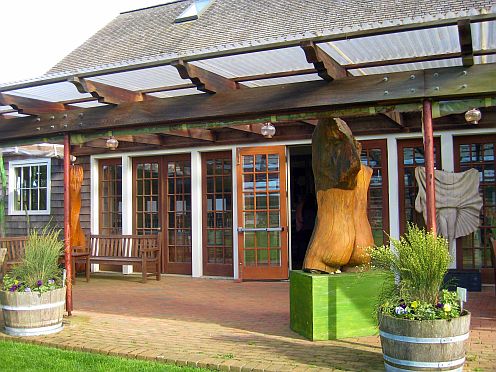 We start with a lineup of whites: Sylvanus is the first, and it's with this wine that I begin to learn that Channing Daughters is no ordinary winery. The wine is made from co-planted grapes that grow together in the fields: muscat, pinot grigio and pinot bianco. Field blending is something done commonly in European vineyards, such as the ones in northern Italy and Portugal. “Sort of Old World in a New World environment,” Ron says as he pours the dry white wine with tones of peach and green apple. It's harvested at different times of the year based on the crop and when the grapes flower, which makes me feel like the wine has a mind of its own.

The wine isn't the only thing here that does: as Ron leaves me to ponder this glass, I look around the room and take in some of the sculpture that, as he has explained to me, was done by Walter Channing himself, who lives quite nearby and named the vineyard for his five daughters before turning it over to Larry Perrine, the current CEO of the company. Christopher Tracy came on board in 2001 as a winemaker, and it was Christopher who came up with some of the more whimsical ideas that I would be introduced to over the course of the tasting. 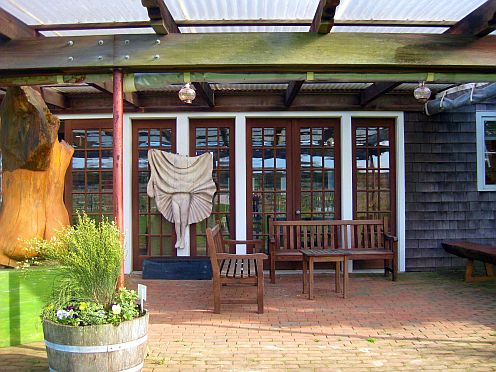 L'Enfant Sauvage, as its name suggests, is “our little wild child,” Ron tells me. “It's chardonnay left to its own devices.” Made without the inclusion of commercial yeast, L'Enfant Sauvage is a little bit unpredictable—it's the brainchild of Christopher Tracy, the first wine that he made here when he came to Channing Daughters Winery in 2001.

“You'll notice we have no reserves,” Ron says. As he pours the Mosaico, he explains that this is because nearly all of the wine here is made from free-run juices, usually only for reserve wines. The Mosaico, which is grown on the western portion of the vineyard, includes tocai friulano, a grape usually only used in northeast Italy. Combined with pinot grigio, chardonnay, sauvignon blanc, muscadet and gewurztraminer, the final product is fragrant and aromatic with a stronger, almost sweet perfume in the front of the palate and a clean finish. As a red wine drinker, I'm surprised by how much I love the whites here. 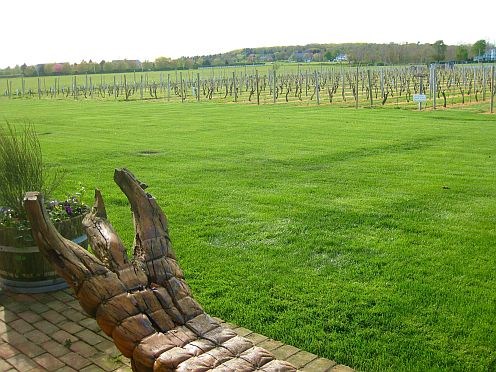 However, the real gems of this vineyard are the wines labeled “orange.” I had always considered wine as having three colors, but these skin-on fermented whites are definitely the prize of Channing Daughters Winery, who became the first on the east coast to offer this wine in 2004, a style and taste so typical of old world preparations in northeast Italy.

Envelope “pushes the envelope for our region,” Ron tells me. It's an orange chardonnay, and it's definitely delicious. My favorite of the skin-on whites, though, is the Ramato, which means copper in Italian. The first whiff of this skin-on fermented pinot grigio is surprising; I definitely don't expect to smell quite this combination from a wine glass. Behind the grapes is the essence of mulch and earth—I'm addicted to smelling it even before having the first taste.

“You don't see this in the US,” Ron tells me as I take a sip of the wine, which is served slightly less chilled than a white traditionally is to let some of the more complex flavors shine through. The umami that I can best associate with parmesan cheese is throughout the wine, but it does not overwhelm: there is also an herbal, grassiness that makes it a pleasant, easily drinkable wine.

We sample a handful of the reds that the vineyard produces, and while they are great wines that would pair well with food, my mind drifts back to the orange wines, the ones that I didn't expect but that made this vineyard shine. 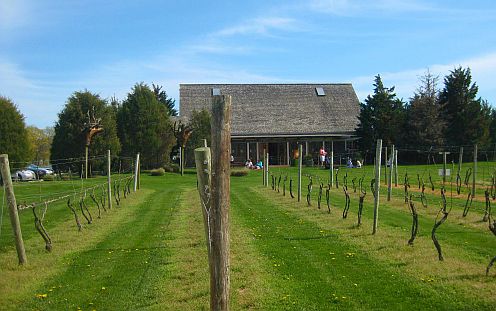 At the end, we try Pazzo—crazy. Like the rest of the wines here that I've most enjoyed, this madiera fortified with neutral grape spirits is completely unexpected. Pazzo was created in 2004, when Christopher Tracy decided to make a madiera in the spirit of the old world, complete with five years in the elements to recreate the voyage the wine would have taken had it been made in the old style. A 2009 merlot was added to the final product for residual sugar; I take a taste and am surprised at how delicious I find it, and I don't even like madiera.

I suppose that's the best thing about a place like Channing Daughters Winery—the winemakers here fly in the face of conformity, forcing wine to reach new limits and try new things. As opposed to sticking what the consumer thinks he wants, like me, who is always ordering off the section of reds on a wine list, Channing Daughters revisits wine in its essence, rebuilding it from the bottom up, creating a new and different adventure, both on the palate and within the tasting experience.