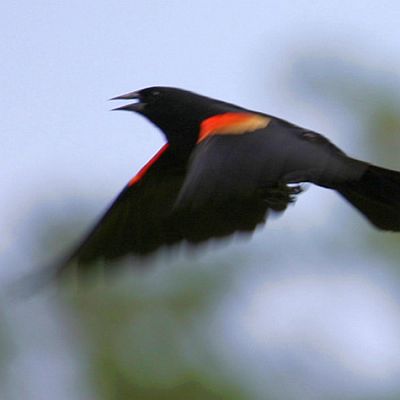 A Red Winged Blackbird and his very sharp beak

Levittown was a great place to grow up in the 60's on Long Island. (Later on we would move to Massapequa.)

I lived on a street called Clay Lane.
Part of the summer of 1966 (I was 9), was spent running for cover from a dive bombing Momma Red-Winged Blackbird.

In those days my Mom had no problem giving charge to a 9 year old to walk a mile and a half across a major thoroughfare (in this case Wantagh Ave.) to pick up a few items from the local A&P.(The traffic was no way what it is today.)

I was the first to be targeted while on my way to the A&P.
What I recall was an ear splitting chirp that to this day makes me flinch when I hear it, and a freaky machine gun like beak pounding away at my skull.
I was not the fastest runner on my street, but I moved like Reggie Bush on this day!

Luckily, for me, no damage had been done, except for a bruised ego and a new found fear of wild birds... To say the least, I was completely flabbergasted!

I ran until I was convinced I was in the clear and continued on to the A&P, all the while trying to figure out what had just happened. I was 9 and had never heard of anything like this. Except in the movie the "Birds", but even I knew that was just a horror flick. Although I half expected Rod Serling, or Alfred Hitchcock to show up.

On my return trip I was again assaulted and again did my best impression of a world class athlete.
Safe at home now, it took a little convincing of my family in the telling of my tale.

In the ensuing days that followed, my fellow neighbors would soon befall the same fate and surprise as I had.
What we would come to realize is the Momma bird was merely protecting her young from what she had perceived to be a threat. Us!

She had errantly positioned her nest inside of a rose bush that snaked through a chain-linked fence dividing two yards... It was simply too close to the ground for her to feel secure.

This went on for a few days, and of course as kids will do, embraced it all, because let's face it, this was kids kind of fun with the added benefit of having the best summertime story to tell when school time came around again... Of course we had to make the most of this amazing event, so everyone broke out their football and baseball helmets, and walked around like that for days!

The threat became too much for the Momma bird and she secretly moved her nest to a higher perch in a Sycamore across the street. She still carried out her attacks, but only if you crossed to that side of the street and got too close to the tree.

This is how we found out where she had gone when she suddenly layed into the kid who lived there while he attempted to play with his matchbox cars in the surrounding dirt at the base of the tree.
The kid let out a scream and his father ran out to rescue him and was promptly attacked... It was more fun than a kid could stand!... But a few moments later it was about to get really crazy!

Billy, a classmate of mine, who had lived a few blocks away, where the news of our bird had not yet reached, was innocently rolling down our fair street, on his bike, when suddenly it struck me... Oh my God, Billy doesn't know!

Billy didn't know of the bird, so how can Billy even know that he couldn't go near the TREE!..So of course I was going to direct Billy to that side of the street..(C'mon! If you were 9 you'd do the same thing!)

I shouted, "Billy!..Don't come on this side of the street!..There's a crazy bird over here!"...There simply wasn't enough time for Billy to process this info and say to himself, "Then what the heck are they doin' over there?"..And I somehow instinctively knew this.

The confused look on Billy's face as I directed him to his impending peril was well worth the beating I caught from him a few days later..(Billy was alot bigger than me.)But nothing can beat the image of Billy's back as he peddled like the wind with a red-winged blackbird clutching locks of hair and pecking away. (I was really not that bad a kid. It just couldn't be helped.)

Later that day, the kid who lived on Cooper lane, behind the house where the bird made it's nest in the Sycamore, was attacked..Only this time it wasn't funny. The kid had to be taken to the emergency room at Meadowbrook Hospital (now NUMC), to get the hole repaired in his head, put there courtesy of our momma bird.

Of course the Bird and her family had to be relocated after that, as we were assured that no harm would come to her and her chicks.

The summer of '66 is a summer I'll never forget..Especially when I hear that chirp!