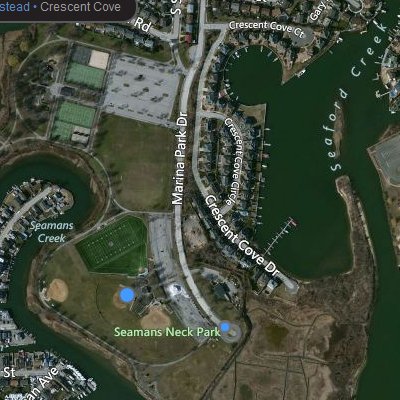 I related a story to my in-laws about a puzzling encounter I had years before with a young boy near the football field at Seaman’s Neck Park in Seaford on Long Island. To my amazement, my father-in-law then confided that he once had a similar experience in another field at the same park! First, my experience:

I was walking on a path along the football field at the south end of the park when I noticed a child standing alone in the grass. There were other people around, but he was off by himself. We didn't interact, yet there was something compelling about this boy, I can't put my finger on it exactly, but it made me take notice.

It struck me that he was under-dressed for the weather, as it was a blustery fall day but he wore no coat. I glanced back after I passed him, concerned that he may have lost his parents, but he had vanished into thin air! He was nowhere in the area. Do ghosts look like real people?

My father-in-law played on an adult softball team at the same park. One day, he realized that he had lost a piece of jewelry and remembered that he had removed his sweater on the softball field. Thinking that it may have fallen off then, he went back to retrace his steps after the game had ended. He hadn't noticed anyone else in the area. But, as he was looking on the field, a woman suddenly approached him to ask what he was doing. He explained the situation to her, and she replied " Don't worry, you'll find it." He did, but as he turned around to tell her "Here it is!" she was gone! She had vanished into thin air.

What are the chances that two "real" people suddenly appear and then, just as suddenly, disappear in the same park? I've been down there many times since but I've never had another weird encounter.

When I was a kid in the 70's we used to keep our boat at the marina next to Seaman's Neck Park and I used to play in that park every now and then.

The marina is all houses now, but it used to be called South Seas Yacht Club. It went though several owners and name changes before the developers got their hands on it.

I never saw anything unusual in the park or the marina, but I do remember a time when the residents along Seaman's Neck Road put up signs asking people not to speed.

One of them read "Give our kids a chance top grow up" and always made me wonder if a child was killed there. I wonder if that could be the ghost you saw? -Bill