That’s what Louisa Hargrave wrote in my copy of The Vineyard when she autographed it for me after one of her lectures. 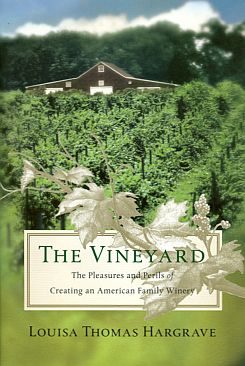 For most of us its meaning is simple and obvious, but after reading The Vineyard, twice, I know those three little words have a much deeper and more poignant meaning for Louisa, Alex and their children.

Louisa founded Hargrave Vineyard, the very first Long Island vineyard, with her husband, Alex in 1973 and reluctantly parted with it in 1999 after they divorced.

Their efforts led not only to their own success, but gave birth to the entire, booming Long Island wine industry.

After returning from a year long ‘round the world hiatus Louisa chronicled her story in The Vineyard: The Perils and Pleasures of Creating an American Family Winery.

Ivy League graduates in the late sixties, Louisa and Alex Hargrave were on a quest. They had to do something for a living, but what? That question led them on an odyssey that resulted in odd jobs, a stint on the west coast, the authoring of an organ meat cookbook (never published, but how I wish I had a copy) and finally, the founding of a vineyard on Long Island.

The decision to start a winery was easy. They both loved wine and admired the vineyards in upstate New York and California. A farm seemed like a good place to raise kids too. Their decision to plant on Long Island’s north fork was based more on feeling than fact, as Long Island was their home.

Most people, including their families thought they were nuts. In addition to all the usual risks associated with starting a new business the difficulties Louisa and Alex faced were compounded by the fact that they lacked experience in the art of viticulture and wine making.

Perhaps the biggest challenge they faced were the vines themselves. Vitis vinifera, the European grape species that makes great wine had never been grown successfully on Long Island (or anywhere on the east coast).

What they did have in their favor were good educations and the determination and willingness to work hard. And work hard is what they had to do to make their farm a success.

They battled Mother Nature and government bureaucracy. Some of the experts they trusted for guidance secretly wished they’d fail. In addition to cultivating vines they had to cultivate a market. No one ever heard of Long Island wine before, would anyone actually buy the stuff?

Creating a market for their product and managing finances was Alex’s job. He worked hard designing marketing campaigns to promote their wine and handled all the tedious bureaucratic details of the business.

The backbreaking fieldwork was Louisa’s job. She and just a few helpers did all the planting, pruning, weeding and harvesting. On an 85 acre farm that is a lot of work. And it’s non-stop almost all year long. In the dead of winter the vines are pruned of last season’s growth, by hand, one at a time. From spring to harvest the weeds are pulled. When fruit starts to ripen the battle against the birds begins…

Vines weren’t the only thing growing at the Hargrave homestead; Louisa and Alex were raising a family as well. Two children in school are enough to turn even the most organized families upside down. If that weren’t enough there were significant financial problems too. For the first ten years they lived on an austere budget. Christmas and birthday gifts were hand made and gifts they received were returned for cash.

They did eventually achieve success but the road was long and hard, and took its toll on their marriage. After 26 years in business together they divorced and sold their vineyard and winery to an Italian prince who wanted to raise his kids on a farm.

I love the way Louisa tells this story. There’s enough detail about the mechanics of viticulture and zymurgy to satisfy my curious mind, but more importantly, as I read The Vineyard I felt like I was living it with Louisa and her family.

The Vineyard is as much about a family’s life as it is about making wine. To Louisa’s credit she tells us just enough to makes us wince, but doesn’t kill us with the details, and her sense of humor balances the serious nature of life on a farm.

The book is well written, interesting and the story is unique. After all, there can only ever be one first vineyard in any given place and how many times do a couple of crazy kids succeed at the impossible?

The Vineyard is a good read for anyone whether or not they like wine. I read it twice and it moved me both times.