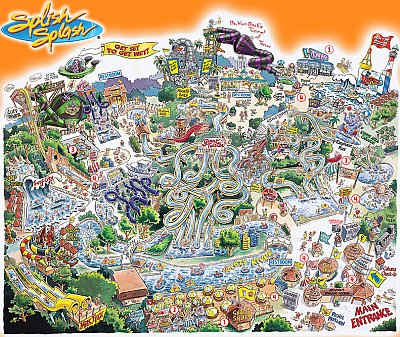 At nearly 100 acres Splish Splash is one huge park

I'm sure everyone has heard of Splish Splash, the water park in Riverhead. What people may not know about is the supernatural energy that calls the park home.

I work in the park during the off season as a security guard posted in the park during grave yard shifts. My hours are from 3 PM to 3 AM. Surfing these 12 hours, I make a complete patrol of the park four times. When I first started, I had always felt like something was following me around the park; watching me wherever I went.

One night, I was patrolling the park, and while patrolling the new Kahuna Bay area, I felt the usual sensation of someone (or something) watching me. As I normally do, I ignored it and continued my scheduled patrol.

As I was leaving, I briefly heard the faint residual sounds of activity in the park coming from a different area. It sounded as of there were the sounds of playing children, talking parents and even the sound of music playing over the PA, as you would hear during open hours I the summer. It was only very briefly; two, maybe three seconds, and I thought nothing of it. It wasn't until later on during another patrol when I realized that there was something in the park with me.

Standing on the pathway down into the Monsoon Lagoon, you can see the boardwalk where all the food shops are. You can also see your shadow on the buildings across the park due to the bright lights that light up the upper half of the park.

I briefly felt something grab my elbow and this of course made me jump. When I turned back to face the boardwalk across the park I saw my shadow, which I expected, and a second shadow standing beside mine!

There was no one there, of that I was sure, but as clearly as I saw mine I saw a second shadow. After a second, as if it realized I noticed it, it took off, moving lefty, before vanishing. After I regained composure, I continued my patrol, albeit a little more on edge, and as luck would have it, the entity was not done following me yet!

Following my route, I travel behind the park through the 'members only' paths and around the the doors to the filter room for the Surf City wave pool. Low and behold, I could hear movement in the building and saw a shadow moving in the light under one of the doors. I sternly called out 'Who's there?' I was responded to with a long hiss, and a Loud bang. The shadow vanished and the noise stopped.

Since then, I continue my patrols, and work as usual, but now I know there's something there. My experience was further reinforced when another guard told me about similar shadows he had seen, and hearing voices and people talking when no one but him was in the park.

Of all places, Splish Splash is home to a supernatural being. Who would have thought?!

Editor's Note: Splish Splash is Long Island's only water park and was voted one of the Best Waterparks in America by the Travel Channel.