Snapper Fishing, Westhampton Beach, Circa 1950 (or so). 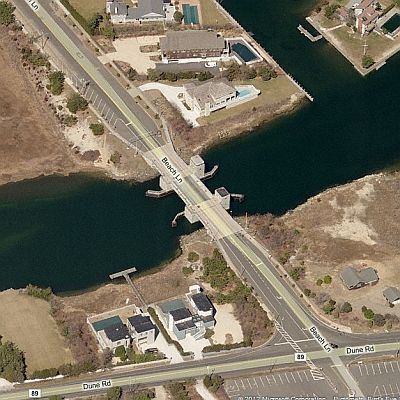 The bridge at beach lane.

There were two bridges that crossed over to the barrier beach in Westhampton Beach. The one at the end of Beach Lane crossed over a narrow canal and was ideal for snapper fishing. The Jarvis family owned a small bait and tackle shack and the beach club there.

They sold 9 or 10 ft. bamboo rods with a corresponding short line, bobber and hook. Affordable for kids. They also sold shiners, the smelt like fish that abounded in the shallows, as bait. They were called that because of what looked like a strip of aluminum foil down each side. (They're also good dusted with flour, fried, and eaten as 'whitebait'.)

On a good day you could catch twenty or so snappers on the rising and leaving tide when the marshes were full. As I recall, they got larger as September approached. Once in awhile one would be caught with large chunk bitten in its side, supposedly by larger bluefish.

I'd like to know if these little snappers are from recent spawnings in the ocean and why only in the late summer. Since they are not around until mid August does that mean they have recently grown up in the ocean?

We've had a house on nearby Block Island for a time, but there is no influx of snappers into what is called New Harbor, a large salt pond with an inlet. I wonder why since it is only fifteen miles from Montauk.

I'm nearing 75 years now so I'd like an answer before I expire. Then I can go in peace.

Bill's reply: Thomas, snappers are born in spring in the southern and mid-Atlantic ocean. When they are small they pretty go wherever the Gulf Stream and other ocean currents take them.

By late summer they migrate into the bays along the Eastern Atlantic coast and that's when we catch them. As the weather gets cooler they migrate down south to warmer waters. I don't know why they don't show up in New Harbor.

I also enjoy eating shiners the same as you. I put them in a plastic bag with flour, salt and pepper, and shake them up until the are nicely coated. Then into the frying pan they go until they are golden brown. I eat them with my fingers just like french fries. My father used to make potatoes and eggs with them and eat it on a sandwich.

By the way, shiners are also known as spearing, but their real name is Atlantic Silverside. They are very easy to catch in waste deep waters with a net. In 20 minutes you can have enough for a full day's fishing with plenty left over to fry.

I hope that answered your question, and I hope you don't "expire" any time soon...