The information on this page can save your life. Please read and share!

Rip currents are the most hazardous beach condition a swimmer can face. Not only on Long Island beaches, but anywhere there are breaking waves, the Great Lakes included.

Rip currents are sometimes mistakenly referred to as riptides and undertow. These names are misnomers because although rip currents pull swimmers away from shore they have nothing to do with the tides and they do not pull swimmers under.

The real danger with rip currents is not that you're getting pulled away from shore, but how you react. Most swimmers will panic and try to swim against the current. They will tire quickly and soon go under.

This video will show you how to spot rip currents and get yourself out of them.

The key to surviving a rip current is to swim out of it, not against it. This is done by swimming parallel to shore.

Since rip currents are fairly narrow you will be out of the “rip” in no time. You can either swim back to shore or let the waves help you back in.

What exactly is a rip current?
A rip current is a narrow stream of water traveling swiftly away from shore. Rip currents are formed when water piles up on the beach instead of flowing sideways away from the breaking waves as it normally does.

Eventually, so much water builds up that the pressure cuts a narrow path through the waves back out sea. The resulting current can be 30 to 100 feet wide and can move at speeds up to 5 miles per hour.

Rip currents are common around piers and jetties so it is wise to avoid swimming near these things.

Spotting rip currents
A rip current looks like a small river on the water’s surface flowing away from the beach. They are sometimes brownish and foamy and can flatten incoming waves making the sea look calm. Once past the breakers the current will disperse frequently forming a mushroom shape. 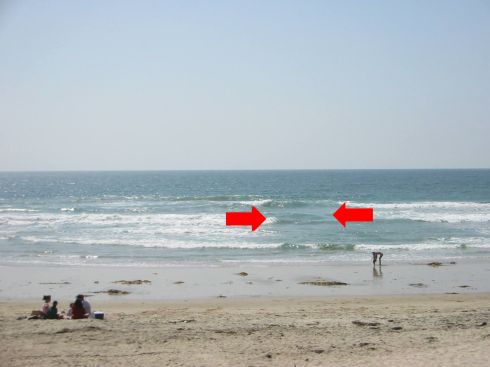 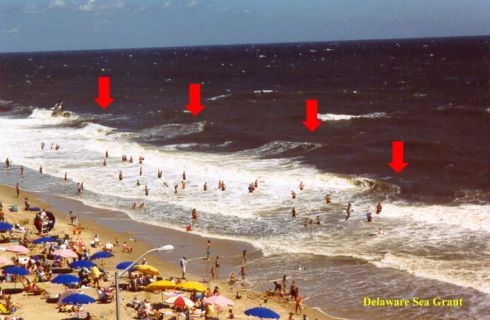 The danger
Rip currents kill by dragging swimmers out into deep water. While fighting to swim back to shore the swimmer becomes exhausted, can no longer stay afloat and drowns.

Many non-swimmers are caught in rip currents when standing in shallow water. The powerful rip currents knock them off their feet and carry them away. Since they don't know how to swim they invariably drown.

If you don't know how to swim but like to wade in the surf, please learn how to recognize rip currents and avoid them. 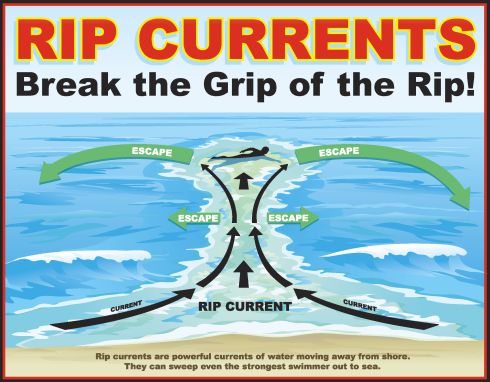 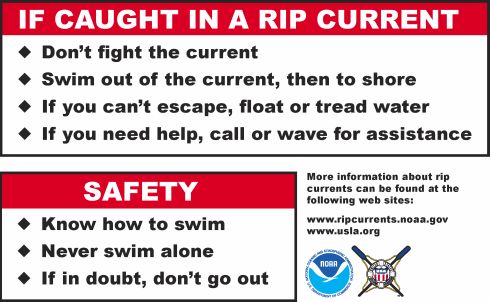 Top of this page

Back to Long Island Beaches