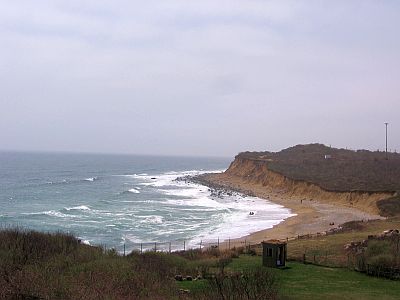 The bluffs at Montauk Point

The three of us drove slower and slower after two hours of driving East towards Montauk Point on Long Island. The fog was so dense we can see only a few feet in front of the flat front 1963 Dodge van, (powder blue, of course). Suddenly, a fog horn slices the night air with such force we almost drove off the road...a few yards later the light house appeared out of nowhere...it was very cool, not realizing we had drove to the end of Long Island.

The road circled back from where we came and we had to find a place to park and sleep. The morning sun spiked through the front windshield taking the place of the normal bed side alarm clock.

"Where are we?" It was neat, we had parked high above the Atlantic Ocean and the sunrise was fantastic, (at least I thought it was). The other two including Bobby, the driver, refused to get out from under the army blankets, and embrace the early morning Spring chill.

As Doug and I look out across the Atlantic Bobby calls out, "Hey, we have a problem." The van was stuck in mud; in fact it appeared the entire plateau was very wet. With the van pointed towards the 100 foot bluff and Bobby at the wheel of his beloved '63 beauty, Doug and I stood on the bumper to add weight to the back wheels as Bobby gunned the motor. "Go, go," we yelled, cheering him on. "Floor it," Doug and I screamed.

The back wheels were spinning faster and faster spraying Doug and I with mud; we held on until the forward momentum caused the back end to jump up and down wildly...we jumped off and yelled for Bobby to keep it to the floor, he was almost free of the mud. As we looked on we realized he was heading straight for the edge of the bluff! We started screaming for bobby to stop! We were frantic!

Suddenly we see the brakes locking the back wheels...the van slides towards the edge...Doug and I are screaming for Bobby to jump, the van will never stop in time...my heart stopped, time stopped....and the van stopped 10 feet before going over onto the beach 100 feet below! Bobby jumps out and matter of factly states, "Well, no way I was letting her go down alone. What's for breakfast?"