It’s hard to describe the Jones Beach Air show without understating it, so let me just say that it’s amazing. It’s also impressive. Very impressive. This is something that you just have to see to appreciate.

Even if you don’t find airplanes very interesting it’s hard not to feel a thrill when a jet screams by at 700mph or does just the opposite and glides by at only 40. And those stunt pilots…holy cow, they must be out of their minds.

I’ve been trying to get to the Jones Beach air show for years and something always seems get in the way. But this year I found myself at Jones Beach at 11:00am just as the show was starting.

Air show attendance has been increasing every year since the show began running about 5 years ago. This year about 210,000 people showed up on the day I went, filling the parking lots and clogging the roads. A lot of people sat in traffic for hours and missed the show entirely.

I was fortunate enough to have left home early, so I missed most of the traffic. The only backups I hit were at the toll booths where traffic always slows down, and at an unanticipated security checkpoint on the boardwalk. 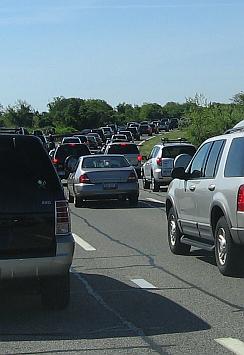 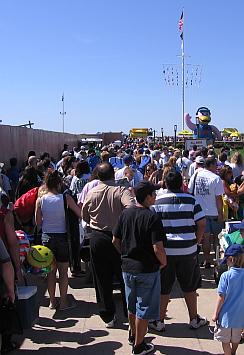 About 15 minutes worth of traffic at the toll booths and the same at the security check. All bags were inspected.

After getting through security I found a spot at the water’s edge to set down my chair and watch the show.

The Jones Beach air show features a dozen performers over a 5 hour period for nonstop action. This year the show kicked off with a spectacular bi-plane acrobatics display by pilot Sean D. Tucker. He was later joined by a monoplane and together they put on quite a show. 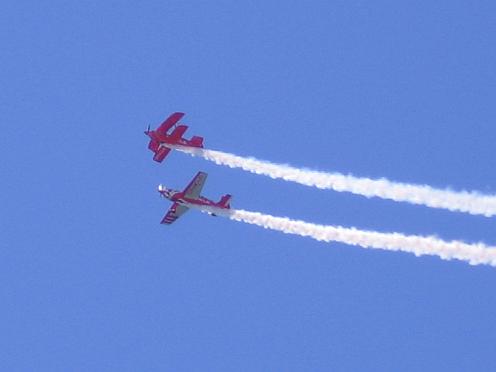 A biplane and monoplane perform together

And so it went for the next hour or so. Each pilot and plane brought something different to the show. There was a rescue demonstration done by the Air National Guard and some excellent parachuting by the U.S. Army’s Golden Nights. 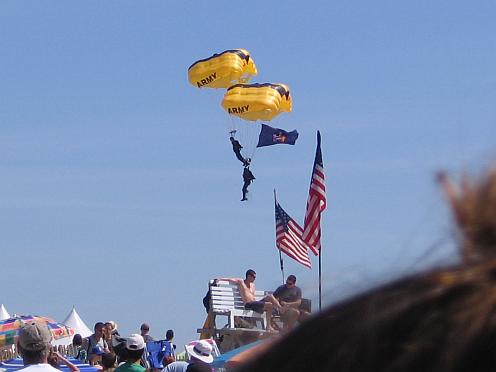 A dozen or jumpers landed right on target

One of the highlights of the show was the F-22A Raptor, a truly amazing plane. I love the way it made it appearance at the show. The Air National Guard had just finished their search and rescue demonstration when out of nowhere the F-22 blasted straight up from the surface of the ocean taking everyone by surprise.

The plane was flying directly towards the beach at low altitude, so we couldn’t see or hear it coming. When the pilot took the plane vertical it looked and sounded like a rocket taking off. It scared me for a moment, but I was thrilled to see such a powerful machine in action. 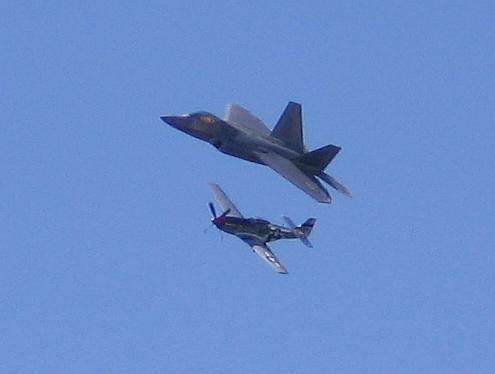 And that seemed like a good, low-tech way to demonstrate stealth technology. I mean, none of us knew that plane was coming and suddenly, there it was. Loud, fast, and deadly.

After showing off its stuff the Raptor was joined by a P51 Mustang and together they performed several aerial maneuvers and flybys.

A series of planes and biplanes entertained us for the next hour or so until the Blue Angels showed up. And this is what everyone was waiting for--the Jones Beach air show main attraction. 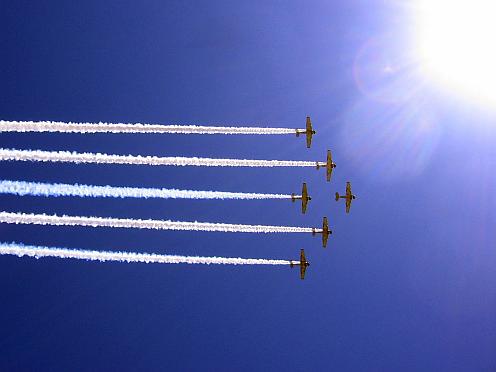 I remember watching the Blues Angels at Jones Beach when I was a kid. They’d perform every 4th of July and we’d watch from our boat anchored in Zach’s Bay. It was incredible.

Aside from the pin-point precision, speed, and technical difficulty of the stunts performed, the thing that I like the most about the Blue Angels is the way they sneak up on the audience.

While some of the planes are performing directly in front of the audience the remaining planes are approaching at high speed from behind. The timing is such that the instant the main stunt is completed, the flyover takes place and scares the daylights out of everyone. Shock and awe!

Now sitting near the surf has its risks, mainly, high tide. You don’t want to get yourself all set up and have the tide come in. If that happens you’ll be in big trouble because the beach is so crowded there’s no place to go. You’ll be sitting in the water. So… check the tide tables to see when high tide is and how high it will be. Then set down your chairs and blankets accordingly.

If you do find the water getting a little too close you can scoop up some sand and make a seawall. I’ve done this myself and the technique works surprisingly well.

Feet and bags stay dry behind a miniature seawall