The Island Mermaid is one of Fire Island's best restaurants. With the largest wine list and menu on Fire Island there's something for everyone at prices typical for island dining. The service is good and the spacious deck offers beautiful sunset views of the Great South Bay.

I went to Island Mermaid recently to try the Taste of Fire Island deal promoted by the Fire Island Ferry company and several restaurants in Ocean Beach. For under $50/person you get the ferry ride, parking, and dinner from a prix fixe menu.

I had heard good things about this restaurant from several people at work, but until now have never had much more than a beer and an appetizer at the bar. I was here for dinner this time and I was not disappointed.

With a large outdoor deck and beautiful views of the Great South Bay Island Mermaid is primarily an outdoor restaurant. While all tables offer water views the best views are from tables closest to the bay. 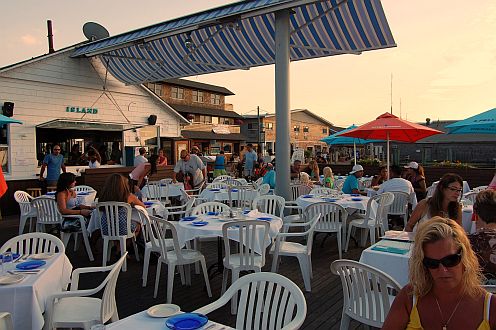 Outdoor dining area at Island Mermaid. The bay is to the right.

If you're sitting closer to the restaurant your view of the sunset will be blocked by the ferry terminal however, watching the ferry come and go is an interesting view in itself.

A large roll out awning covers the deck providing protection from rain and sun, and the lightweight plastic tables can be moved inside on really bad days. 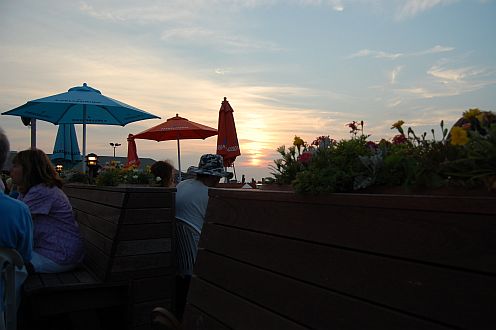 The view from our table of the setting sun.

We arrived about 5 minutes late for our 6 P.M. reservation, were greeted by the manager and seated promptly at at table overlooking the bay. Our view was excellent and a nice breeze kept us cool on this very hot August evening. A waitress came by to take our drink order and we settled in for a nice sunset dinner on the bay.

Island Mermaid has the most extensive wine list on Fire Island and it even includes a few Long Island wines. I would like to have seen more, but since so many restaurants don't offer any Long Island wine at all I was happy to see at least something. 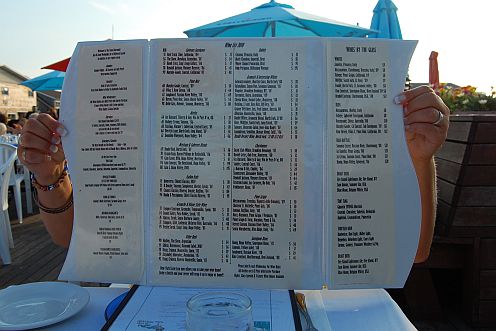 Appetizers on the left, wine in the center; wine by the glass, cocktails and beer on right.

Karilyn tried the house pinot grigio which was very good. I skipped the wine in favor of a pint of Fire Island Lighthouse Ale. This is the second Fire Island restaurant I've been to this season that served Lighthouse Ale warmer than it should be and flat, instead of cold and properly carbonated.

I've heard people say that tap beer on Fire Island no good, but that has not been my experience at Island Mermaid and several other Fire Island bars/restaurants, so I'm not sure what's going on with the Lighthouse Ale.

After the beer I ordered one of Island Mermaid's Gigantic Svedka Martinis and Karilyn had a lemon martini. I wasn't impressed with either cocktail. Svedka is one of the less expensive vodkas out there, so I wasn't expecting much in terms of flavor, but this martini seemed a little weak as well, as if it had sat on the ice too long.

Karilyn enjoyed her lemon martini, but it was a little too sweet and lemony for my palate. Next time I'll stick with my usual vodka, Ketel One.

While we were having our martinis our waitress brought over a basket of homemade bread, cornbread and flat break crackers along with herb infused olive oil and olives. This was very good and helped take the edge off of our appetites before the appetizers came out.

The appetizers on the prix fixe menu were soup or salad. It was too hot for soup and I wanted something more than salad, so we ordered some tuna tataki in addition to the salads. 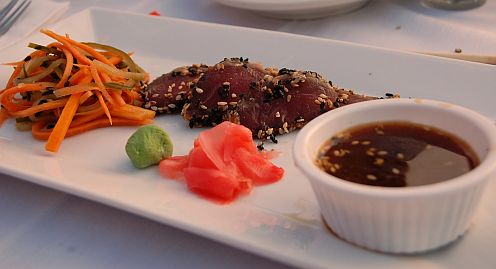 A nicely prepared tuna tataki. The serving was larger, but  some was eaten before I remembered to take the picture.

Served with wasabi, a dipping sauce, shredded vegetables, and coated with toasted sesame seeds, the tataki was very good. Since the tataki was not on the prix fixe menu this was an addition charge on the bill. 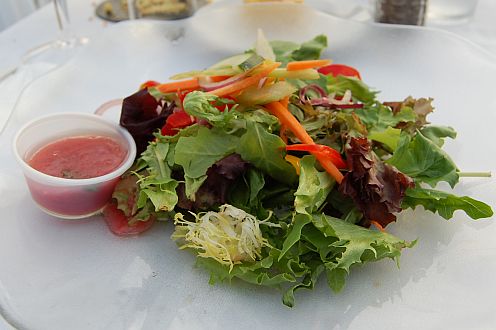 The mixed green salad with a vinaigrette dressing.

Next up were our salads. These were standard mixed green salads with a choice of dressings. Nothing to write home about here, but no complaints either.

There were 7 entrées on the menu covering beef, pasta, poultry, fish and fowl. Peking duck is one of all time favorites, so I couldn't resist when I saw it on the menu. Karilyn is a meat and potatoes girl, so it was skirt steak for her. 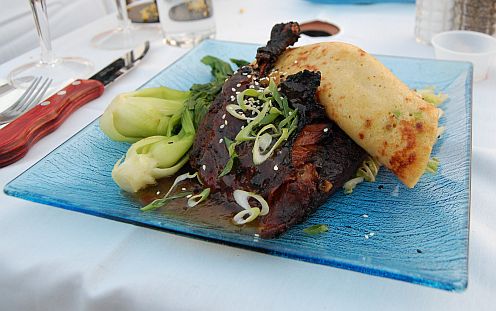 The Peking duck was served with Asian vegetables and a scallion pancake, and covered with a delicious hoisin sauce. This duck was surprisingly good and I would definitely order it again.

The churrasco style skirt steak was a Meyer's Hormone free, certified humane Angus served with lime green beans and seasoned fries. This was also very good although it was expensive; $6 extra on the prix fixe menu. 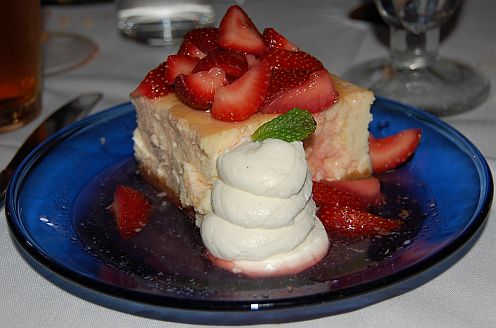 By the time desert came we were stuffed, but somehow managed to finish everything on our plates. The deserts were very good and the fresh whipped cream was a nice touch.

Island Mermaid gets high marks from me for their food. 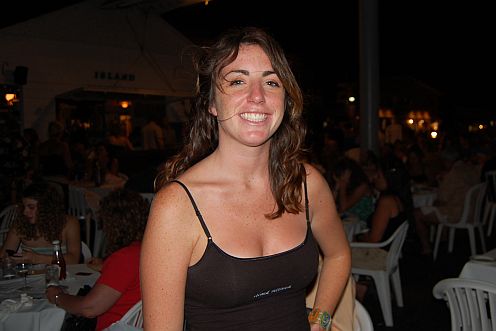 Our waitress provided service with a smile. Thanks Nell!

The service was very good. Our waitress was attentive and polite. Even though she was working a busy crowd we never had to wait too long for her to show up when we needed her. And when we had questions about the bill the manager came right over and very quickly resolved the problem.

We had a great time at Island Mermaid. I don't know if it was the view, the food, the drinks, or maybe the combination of all three, but this is one Fire Island restaurant that we look forward to visiting again.

Boaters: Island Mermaid is located between Houser's and the ferry terminal. There are 4 slips available at $20/hour no matter the size of your boat. Call in advance to reserve a slip.

Right next door to Island Mermaid, hidden behind Houser's Bar is another excellent restaurant, The Hideaway. Enjoy that and several other restaurants with the Taste of Fire Island dinner package.

More things to do on Fire Island and in Ocean Beach.