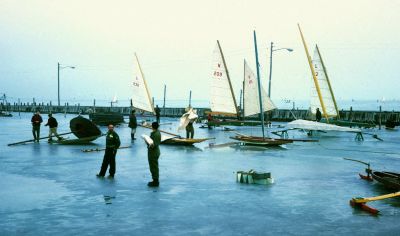 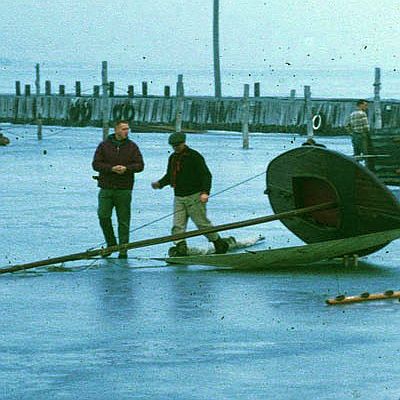 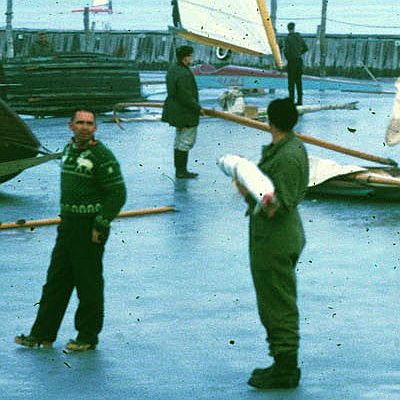 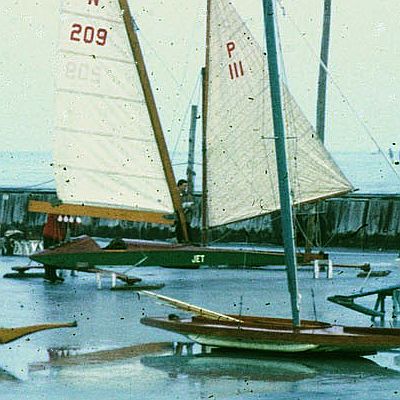 I took this picture during a fantastic winter in Bellport.

I was doing physics research at Brookhaven Laboratory. I eventually ended up as a professor at the University of California in Davis, from which I'm now retired and living along the Sacramento River in a little town called Martinez.

I'd been a lifelong sailor, and loved the Great South Bay. I had a small cruising boat -- a Schock-22. I frequently sailed over to the Old Inlet Club in the summer. Loved the Club and the beach. I wonder if the Club's still around.

When I learned about Scooters, I wanted one. Someone pointed me to an ancient wooden one, which I bought and learned how to sail. Occasionally I borrowed a DN, which was also fun.

I broke through the ice on more than one occasion, and had to hoof it back for haul-out help. I never managed to do the kind of leap from ice-to-water-back-to-ice which I was told was possible. The Scooter design did let me sometimes break through and remain dry while climbing onto the ice.

My most memorable adventure involved my pregnant and visibly bulging wife. There were three of us on the boat. She was sitting toward the stern. I, the skipper, was by the mast. We hit a bump in the ice and I managed to drop the jib control line (it probably has a special name, which I don't know. It somehow seems wrong to call that line a 'tiller').

Anyway, the Scooter bore away fast, and ended up doing a couple of 360 turns. In the process my wife was centrifuged off the stern. I have a strong visual memory of her bouncing across the ice.

I have an even stronger memory of her mood-- her refusal to get back aboard, of her hike home across the ice, and of family tension for a few days thereafter.

The kiddo came out fine, and these many decades later has a kid of his own.

The Scooter didn't do so well. I stored her on her side up against a tree. Winters were warm, summers wet, and the carpenter ants or termites active. After a few years I discovered she was riddled with holes. Unsalvageable.

She was sure a lot of fun while she lasted.