I never really thought of Long Island as a haunted kind of place. I grew up here and it just seemed so normal. 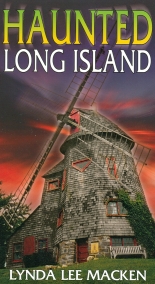 There were never any ghost stories in the headlines and no building or structure I was aware of was known as haunted.

There were rumors about Mount Misery and that strange house in Massapequa (you know the one) where I grew up was pretty strange, but still, not haunted.

To me haunted houses and the like were the things of New England or southern plantations. In my mind Long Island was a plain as plain could be…

That was until I picked up a copy of Haunted Long Island, a new book by Lynda Lee Macken.

Haunted Long Island visits 32 ghostly sites on Long Island. 32? Wow, I didn’t know we had any… But Lynda tells it all.

In the Fire Island Lighthouse for example doors slam, the unreachable top windows open by themselves and odd laughter is heard, all when the lighthouse is empty.

Could it be the ghost of the keeper that hung himself there in 1825? And what about the skulls and bones that wash up on the beach from time to time? Could their former owners be living at the lighthouse?

The Lady of the Lake in Lake Ronkonkoma is a haunted legened that I did hear as a kid. According to Haunted Long Island a 17th century Indian princess drowned herself in the lake because her father forbid her romance with a white man.

In another version, the princess is engaged to a tribesman. A white man killed him just a few days before their wedding. Consumed with grief the princess swam out into the lake, swore she would avenge his murder by taking the life of one young man every year, and then drowned herself.

The princess’ body eventually turned up in a Connecticut river giving rise to the idea that the lake has no bottom. Today we know the deepest part of the lake is only 70 feet, but in that haunted corner moaning is heard, lights are seen and whirlpools whirl.

Perhaps the strangest tale in Haunted Long Island is the one about the self-igniting lamp at a private residence in Sag Harbor. Concerned about seeing a light on in her attic (where there were no lights) the homeowner checked for electrical problems--perhaps a sparking wire was the cause.

Finding nothing amiss the homeowner rests assured until a neighbor mentions that her attic light is on night after night. Now doubly concerned the homeowner checks again and finds an old oil lamp which she brings downstairs to her living room.

One night she hears a loud noise downstairs. Upon investigating she discovers the lamp is lit. She rationalizes that maybe the lamp is not really lit; it’s just a reflection off the glass. But, being just a little spooked, she puts the lamp in a closet and forgets about it.

Years later she rents the house out and travels to Europe. While there she gets a call from her tenant.  He explains that there’s a light coming from under the closet door.

Of course, she knows exactly what the cause is, but the closet is locked and the tenant can do nothing about it. When she returns from her trip she sells the lamp to a local antiques dealer. Good riddance…

Those and 29 other spooky stories are yours for the reading in Haunted Long Island. Lynda’s style in this book is clean and to the point. Each story is no more than a page or two long and the book can easily be read in one sitting.

Some of the stories in this book really gave me the creeps, but I guess that’s what the book is meant to do…

Haunted Long Island makes an excellent reference book and I’d say it’s a must for every Long Islander’s bookshelf.