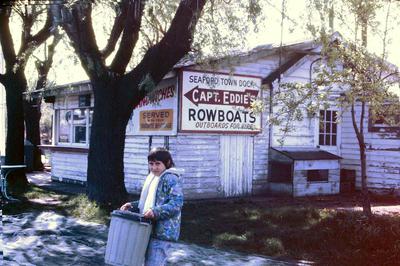 Getting ready to go out on a cold day in May, 1971 (photo submitted by Jeff Karpiscak).

Wow, what memories that brings back (See note below). I grew up in North Seaford and moved away when I was in my twenties back in the late 70's.

One of my friends had an old 1950's 3½ horsepower Johnson outboard that we would take down to Captain Eddy’s in the back of one of our Mom’s cars. We always got there by 6:00am to rent one of the old wooden boats and a five gallon gas tank. Then we’d head out into the bay for flounder.

I remember freezing our fingers when we would go out in April with usually four of us in the boat. Sometimes we would just rent one of the boats they had with a cabin and take a Hibachi grill to keep warm.

In the warmer months we would walk alongside the boat, barefoot during low tide and get clams to take home. Our parents loved it when we went because we always came home with fish.

One time we headed east after heading out of the canal and tied up to a channel marker and caught 127 flounder using blood Worms for bait and chumming with mussels that we pulled out of the bank in the marsh.

There was an old guy named Lou who was hard of hearing and we would talk him into selling us beer when the two owners were out back. We were probably 15 back then.

Eventually two of my friends got boats and we would go down and "borrow" Dave’s Boston Whaler telling Lou that Dave said it was OK.

I also remember soaking one of the cops with the rooster tail from my buddy Dennis's hydroplane the "Beatnik Fly" When he tried to pull us over for going too fast on the way to Wantagh Park.

The police had a Boston Whaler with a 135 Mercury that was not fast enough to pass us, but just fast enough to keep up with us. We would slow down just enough to let him get about 25' behind us and then speed up. Man did he get wet. He eventually gave up and turned around.

I spent many a night in that parking lot with a certain local blond in the backseat of my 69 Charger fogging up the windows.

Yep, those were the days.

Oh, I found your Blog while Googling Captain Eddy’s as I am coming back in October for my brother’s wedding and wanted to show my son some of the places I used to hang around.

Editor's note: Chris is referring to a blog post I did back in Jan, 2008 about Seaford Dock. Before the area became a park it was the site of Captain Eddy's and Pop's, two very small businesses that rented boats to weekend fishermen. If anyone has pictures please let me know, I'd love to post them here. -Bill