Bocce Beach is a restaurant in Ocean Beach on Fire Island. In Italian bocce means kiss and is how the game bocce ball got it's name. A nod to the game is visible in the form of two large, round buoys lining the restaurant entrance like giant bocce balls on the lawn.

This restaurant is located on the south side of Bay Walk and therefore does not offer bayside dining. What Bocce Beach does offer however, is a very cool covered porch. Relatively small openings and a large overhang offer protection from the elements while giving you the feeling of being outside.

We sat there in the rain watching people with umbrellas go by and didn't feel a drop. I love the feeling of being sheltered during a storm and yet just inches away from it, so this is my restaurant of choice for foul weather dining. The porch also offers far more protection from the sun than the flimsy umbrellas at some of the other Fire Island restaurants.

I've had excellent prime rib at Bocce Beach, but my most recent experience here was somewhat disappointing. On this particular night the food was just not up to par. But before I get to that let me tell you about the prime rib... 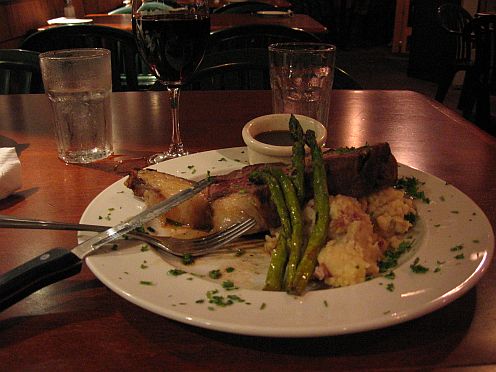 A very good prime rib. Note the two water glasses. One is filled with ice for my wine.

The prime rib special is served every Friday and Saturday night, and in my experience is very good. As much as I love beef I'm not a real big prime rib fan, but every now and then I crave it. I wasn't even thinking prime rib when I walked into Bocce Beach on this particular night, but when the waitress mentioned it that's all I wanted.

Mine was served rare yet hot, exactly the way I like it. It came with jus dipping sauce, mashed potatoes and asparagus. All were very good. The house cabernet I ordered with it wasn't bad either, but I did have to drop in an ice cube to cool it off a little. (I can hear the wine snobs wailing all the way from here. So I put ice in a house cabernet served in the middle of summer in a restaurant without air conditioning. Get over it.)

I was looking forward to anther experience like that, but my second visit to Bocce Beach did not live up to expectation. 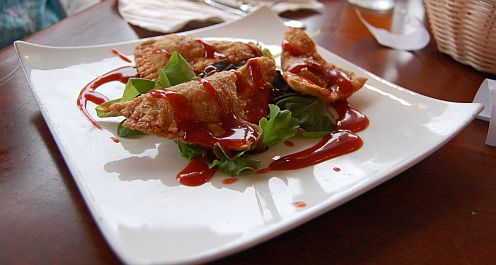 Fried wontons tasted as good as they looked, but I couldn't figure out what was in them.

We were ordering from the Taste of Fire Island prix fixe menu but added an off menu appetizer of BBQ beef wontons which was a special that evening.

These looked great and were actually not bad at all except I couldn't identify the filling, which I assumed was supposed to be beef. It was a blend of something with no meat in it that I just couldn't identify. 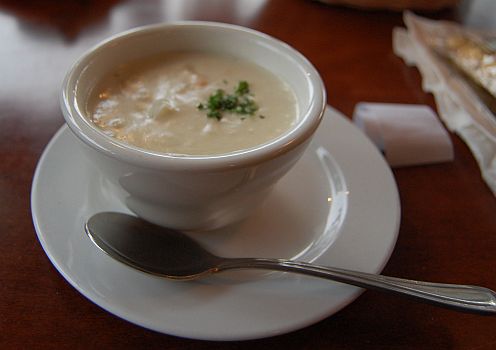 We followed with New England clam chowder which was big on clam flavor, but otherwise unremarkable and way too thick. This might have been okay in cooler weather, but in the middle of summer I have to question the logic in serving such an overly thick, hot soup. This could have been a lot better. 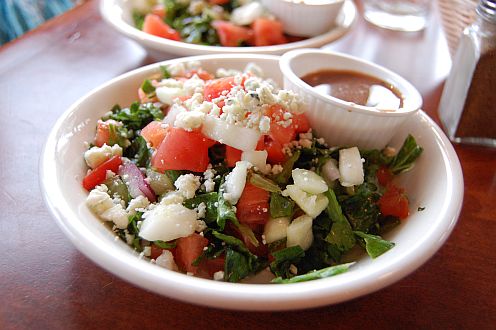 Tasty chopped salads cleared our palates after the soup.

Next up were romaine salads chopped with tomatoes, onion and cucumber, and topped with Gorgonzola cheese. These were good and the cool greens were a nice break from the clam chowder. 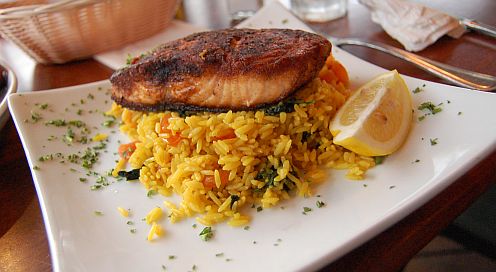 Salmon with the skin on was crisp and just barely cooked in the center as it should be.

My entrée was salmon served over rice. This large portion was seasoned and cooked to perfection. The center was just done and the outside was crisp. The skin was still on which I always appreciate. The yellow rice was mixed with tomatoes and spinach, and was very good.

Karilyn had the BBQ ribs served with corn on the cob and coleslaw. When I asked how they were she just looked at me and said, “I've had better.” 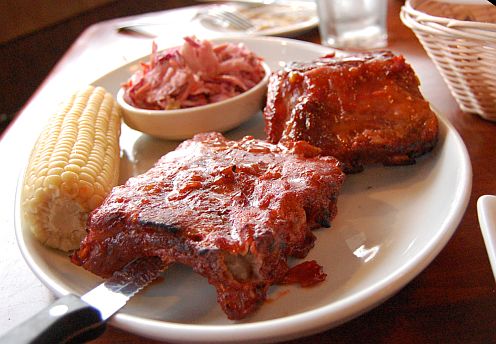 The ribs, corn, and coleslaw were not very good at all.

These ribs were not barbecued, but baked and then covered with sweet and sour sauce before serving. The meat was tough and did not fall off the bones as the menu suggested. This was quite surprising since Bocce Beach has “rib night” 3 times a week. You'd think they'd have the ribs down to a science. The corn was colorless, waxy and flavorless, and the pink coleslaw looked a lot better than it tasted.

To have everything wrong on one plate is unusual and quite disappointing. We should have sent it back, but being pressed for time that was not an option.

In all fairness to the folks at Bocce Beach I should point out that no establishment is perfect and everyone is going to have an off night here or there. Judging from the way this place is usually packed, they must be doing something right.

The service here is excellent. We got plenty of attention from the hostess and the waiter was prompt, courteous and informative.

On the night we were here there was a children's birthday party in progress. It looked like they'd be finished soon because we saw empty plates, so we decided it'd be safe to sit in the covered porch along with them. It turned out that they had a long way to go... The hostess did her best to keep the kids under control (parents?) and even brought them into another room to give us a little quiet.

So, high marks for service.

I was here twice in total and got one bad meal. That's not great, but I'm not crossing Bocce Beach off my list just yet. There are big dinner crowds and a vibrant night life, and that tells me that lot's of people love this place. We'll see...

Directly across from Bocce Beach is Mathew's Seafood House. I highly recommend it.

More things to do on Fire Island and in Ocean Beach.